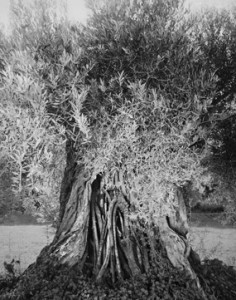 From Bad Oldesloe in Germany, we received an invitation to the exhibition “Götterbäume” (Gods’ Trees) by Christian von Alvensleben. It will be opened on 19th March in the Villa Ruh in Zingst on the Baltic Sea. To quote from the announcement:

The olive trees were discovered by Christian and Helga von Alvensleben on the Island of Rhodes between 2000 and 2006. Their location was established by satellite navigation and the diameter of their trunks was read at the widest point (up to 500 cm in diameter). The trees are either very close to early Christian churches or on impassable terrain. Most churches were built on the sites of ancient Greek cults and it can be assumed that some of the olive trees photographed are over 2000 years old. The olive bears witness to an ancient culture and has characterised life in all of the Mediterranean countries since the time of Homer.

More examples from the exhibition may be found on the photographers website.

Found my local at last